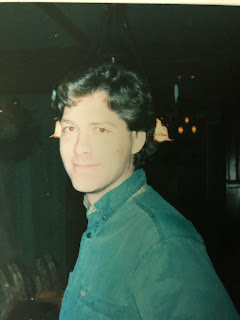 My brother has been lost for a long time. I took this picture the last time I saw him, over 25 years ago.  He called me on the phone once around that time, and once maybe 10 years ago he chatted with me on messenger for about twenty minutes.  We chatted about going to the drive-in when we were kids.

But then he disappeared again.

That was his way. He preferred to remain remote.

Last week we got news that he had taken his own life. He was alone in a pay by the week motel.

Now, he is really lost.

I remember when we were younger, we went to a local amusement park together, just me and him. It was a night in late summer/early fall, and not many people were there. We were thrilled because there weren't any lines for the rides. So we rode the roller coaster and got off and ran around to the entrance and rode again and again. We went on all the rides as many times as we wanted!

One ride was a type of ferris wheel, but you rode inside a cage that had a sort of steering wheel in the center. If you got that steering wheel going fast enough, it turned the cage upside down and you would not only be making the big ferris wheel circle, but you would be flipping around in your own personal circles. It was incredibly thrilling! We were bold and got our little room hurling us around and around and around. That night, when we went home, we lay on the bed and looked at the ceiling and laughed and moaned because our brains thought we were still spinning.

A lot of times I think he and I were not very good companions. I was the oldest and could be cruel in the petty way of annoying older siblings. But, more often perhaps, we weren't dueling. We were side by side as a matter of course; part of the neighborhood kids playing kickball in the street, part of school kids trying to win free popcorn, or part of the church kids toilet papering someone's front yard (oh! we did a wicked one of those once). We had little inside jokes from these shared experiences, and small understandings.

But when we got older, to high school I guess, the space between us widened. The way space opens up between you and your parents at that age. You start to move into the next phase of your life, and, at least with me, I didn't look at what I was leaving behind.

And so, I lost him. He always knew where to find me--where to find any of us--but he was going forward in his own way. Only, he got tumbled around, like being in that ferris wheel cage, and lost his bearings.

It has been a dark and mournful week, and particularly heartbreaking for my parents.

Yesterday, I hiked up a mountain on a cloudy, humid morning.  As people moved ahead, they disappeared into the mist. I knew they were there, but I little by little they vanished. Of course, this made me think of my brother, who has not been far from my mind all week--and also of my late first husband. I imagined their souls disappearing from view ahead of me on the course. Perhaps their souls are just over there, out of view from where I am traveling now.

I don't know if I believe that, but I would like to.  And maybe our little dog is following along with his white little flag of a tail. 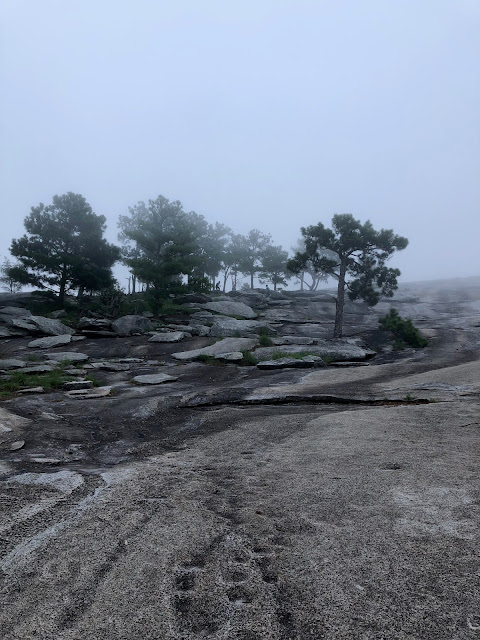 Posted by Neighborhood Watch at 2:10 PM

Neighborhood Watch
Hi! Welcome to my blog. I write about being outdoors, gardening, knitting, and a little bit of everything else.